The warm golden light shines down while she tunes her guitar. Looking out at smiling faces, many of them her friends and supporters, Kat Mills takes a deep breath, as if to take it all in and keep it inside for a while. You would never guess by the calm cool way she talks to the audience, tells stories and sings that she has self-doubts, because when she is singing, everything is perfect. 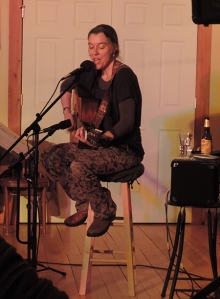 Mills is a local singer-songwriter who has gained notoriety through her deep, rich, voice, eclectic sound and deeply rooted folk writing. From hard biting political songs, to emotional songs of love, Mills captivates audiences of all ages. Reinventing her career in 2014, Mills is changing her performance format, adding audience participation, poems, prose and new songs and recording her fourth album this summer.

In her bright and eclectic home, Mills points out posters around her living room of Bob Dylan, Willie Nelson and Bob Marley. She says, “I have to have my idols around me at all times for comfort and inspiration.” She is a writer, singer and seeker, influenced by ‘60s and ‘70s legendary folk music. She explains that as a teenager, hearing Joni Mitchel, Joan Armatrading and Sinead O’Connor she realized that strong women could speak their minds creatively in song. “There is something particular about a woman, alone with a guitar, speaking her own ideas, that is important, and that I feel connected to, it has always been my mainstay.”

Singer-songwriters often provide the sole guitar or piano accompaniment to original songs. Both the composition and the arrangements are written to be performed solo with material covering topical issues featuring political, introspective or romantic subject matter.

Embracing the singer-songwriter, troubadour tradition, some of Mills songs are about topical issues, such as the recent water pollution spills in West Virginia and North Carolina. She researches a subject, gets a feel for the issue and then writes a song that enables her to express something about it while performing.

Mills has made a name for herself locally and opened for nationally known performers such as Levon Helm, Dar Williams, Grace Potter and The Nocturnals, and Matt Flinner.   In the last 15 years she has played many festivals, bars, and restaurants, honing her skills and repertoire.

Raising a young daughter has been the main focus of Mills’ life for the past several years. Although the song writing and playing did not stop, Mills slowed down, traveled less and became more involved in the local community, while rethinking the 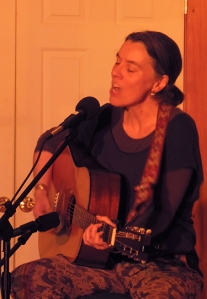 kinds of events she has played and envisioning a new future for her career.

Looking out the window onto a quiet residential street of the small college town she loves to call home, Mills tries to explain her new career insights, redefining her whole persona of creative person, wife, and mother. House concerts and quiet stages are in her new vision for future audiences. She says, “Now I am more compelled to have enough of their attention, to have that kind of conversation, we are all having at that moment, all experiencing it at the same time.”

As Mills prepares to launch her new endeavors, traveling with and without her family to performances and recording a new album, she is apprehensive about readjusting to the professional musician life. She explains, “This is new for everyone. Everyone is on board and excited about it, but no one knows what it will be like. It is terrifying and exciting.”

At an intimate house concert in a room with vaulted ceilings and great acoustics, Mills sits on a stool with her guitar. In the glow of music and friendship, she sings with her strong, sweet voice, prompting audience participation, telling stories and reading prose. She looks quite at home and at ease. Maybe she is remembering her words just days before while expressing anticipation for future performances, “Suddenly things start happening because by connecting yourself and humbling yourself and getting your ego out of the way, you are part of a bigger organism.” With this performance the new adventure begins.